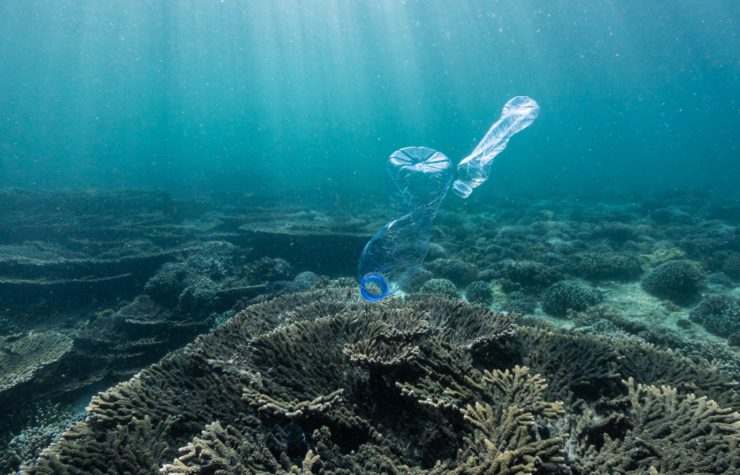 A range of impacts from both, natural and man-made sources threaten coral reefs around the world. Read on to learn about the different threats and how you can help to protect coral reefs.

Increasing demand for food fish and tourism curios has resulted in over fishing of not only deep-water commercial fish, but key reef species as well. From subsistence level fishing to the live fish trade, inadequate fisheries management is forcing the decline of fish stocks. Choose seafood products that come from certified, well-managed and sustainable fisheries. Certified products are available at most supermarkets – check out the product label, or visit: www.fishonline.org

Fishing with dynamite, cyanide and other methods that break up the fragile coral reef are highly unsustainable. These methods generally do not select or target particular fish species and often result in juveniles being killed in the process. Damaging the coral reef habitat on which the fish rely can also reduce the productivity of the area, with further impacts on the livelihoods of fishermen.

Tourism generates vast amounts of income for host countries. Where unregulated however, tourism pressures can cause damage to the very environment upon which the industry depends. Physical damage to the coral reefs can occur through contact from careless swimmers, divers, and poorly placed boat anchors. Hotels and resorts may also discharge untreated sewage and wastewater into the ocean, polluting the water and encouraging the growth of algae, which competes with corals for space on the reef. Be an aware tourist.

The growth of coastal cities and towns generates a range of threats to nearby coral reefs. Where space is limited, airports and other construction projects may be built on land reclaimed from the sea. Sensitive habitats can be destroyed or disturbed by dredging activities to make deep-water channels or marinas, and through the dumping of waste materials. Where land development alters the natural flow of water, greater amounts of fresh water, nutrients and sediment can reach the reefs causing further degradation.

Coral reefs need clean water to thrive. From litter to waste oil, pollution is damaging reefs worldwide. Pollution from human activities inland can damage coral reefs when transported by rivers into coastal waters. Do your bit – do not drop litter or dispose of unwanted items on beaches, in the sea, or near storm drains.

It is estimated that nearly 2 million people worldwide keep marine aquariums. The great majority of marine aquaria are stocked with species caught from the wild. This rapidly developing trade is seeing the movement of charismatic fish species across borders. Threats from the trade include the use of cyanide in collection, over-harvesting of target organisms and high levels of mortality associated with poor husbandry practices and insensitive shipping. Some regulation is in place to encourage the use of sustainable collection methods and to raise industry standards. Choose Marine Aquarium Council (MAC) certified products for your home aquarium.

Observations since 1961 show that the average temperature of the global ocean has increased even at depths of 3000m (IPCC report), and that the ocean has been absorbing more than 80% of the heat added to the climate system. Such warming causes sea level rise and creates problems for low lying nations and islands. Elevated sea temperatures has been linked to coral bleaching. In 1998, a mass coral-bleaching event was responsible for the death of corals around the globe, and there have been frequent bleaching episodes observed every year since.

The Crown of Thorns Starfish is a voracious coral reef predator. Populations of the crown-of-thorns starfish have increased since the 1970s and large outbreaks of starfish can occur wiping out huge tracks of coral reef. Few animals in the sea are willing to attack the spiny and toxic crown-of-thorns starfish, but some shrimp, worms and species of reef fish do feed on larvae or small adults. The decline of these predators, through over-harvesting and pollution, is one factor contributing to the rise in the population of the starfish.

During the last 10 years, the frequency of coral diseases appears to have increased dramatically, contributing to the deterioration of coral reef communities around the globe. Most diseases occur in response to the onset of bacteria, fungi, and viruses. However, natural events and human-caused activities may exacerbate reef-forming corals’ susceptibility to waterborne pathogens. More information is needed to identify the mechanisms by which most diseases kill their hosts, and how they are transmitted. It is critical that governments and managers continue their efforts to reduce (or stop) the effects of other major reef threats (sediments, pesticides, nutrients, over-fishing, etc.) while this scientific information is gathered, if we are to give coral reefs a fighting chance of survival.

Species that, as a result of human activity, have been moved, intentionally or unintentionally, into areas where they do not occur naturally are called ‘introduced species’ or ‘alien species’. In some cases where natural controls such as predators or parasites of an introduced species are lacking, the species may multiply rapidly, taking over its new environment, often drastically altering the ecosystem and out-competing local organisms. The damage caused by invasive species can be devastating, through alteration of ecosystem dynamics, biodiversity loss, reduction of the resilience of ecosystems, and loss of resources, with environmental, economic as well as socio-cultural impacts.

Is the name given to the ongoing decrease in the pH of the Earth’s oceans, caused by their uptake of anthropogenic carbon dioxide from the atmosphere. Although the natural absorption of CO2 by the world’s oceans helps mitigate the climatic effects of anthropogenic emissions of CO2, it is believed that the resulting decrease in pH, (i.e. making the water acidic), will have negative consequences, primarily for oceanic calcifying organisms such as coral reefs.